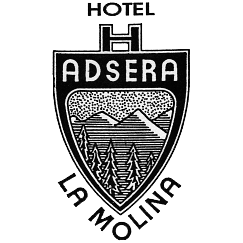 A Hotel Steeped in History

The Adserà Hotel dates back to 1934, the year when the founder, Pere Adserà Tomas, began construction of the first part of the building. Having been a tenant of the chalet at the Centre Excursionista de Catalunya (Catalan Walking Club – CEC) since 1925 and given the rising demand for places, he started construction of a building with rooms to cover accomodation needs.
Since then, the original building has undergone various extensions and refurbishments, to give us the modern-day hotel, still run by the same family.

Pere Adserà Tomàs’s arrival in La Molina dates back to December 1925, with the founding of the CEC Chalet. As the chalet needed someone to run it who was prepared to live there, Ignacio Folch contacted Pere Adserà Tomàs who, after visiting the premises and selling his hotel business in Barcelona, moved to La Molina with his family.

Pere Adserà took up the position of the first hotelier with such enthusiasm and affection that, together with the CEC, he soon started to make improvements and extensions to the Chalet in La Molina. At that time, there was no electricity, telephone, water network, or even a passable road in La Molina. All of this was achieved through struggle and self-sacrifice.

In 1934, Pere Adserà constructed the first new building, which would later become Hotel Adserà. From 1936 to 1939 he spent the whole Spanish Civil War in La Molina. The Alpine Brigades were billeted at the CEC, after which it became a site for children’s camps.

After the war, in 1939, Pere Adserà started building work again and between 1942 and 1957 he installed the first water pipes to reach La Molina. He also constructed four new buildings, of which one became the Samaranch Sport Clinic, another the Maina building and the others extensions to the Hotel Adserà itself. He worked together with the Terrassa and Sabadell clubs on the construction of their own hotels, which he managed for a number of years. He also rented some of the annexes to the Barcino Tennis Club for a number of years, until they built their own building.

He took part in the construction of the first chairlift in Catalonia, promoted by the well-known pioneer Josep Mª Guilera, in 1943, by acquiring shares which were issued to defray expenses. This pioneer, a man who dedicated his whole life so affectionately to La Molina, eventually become the area’s first postman and meteorologist.